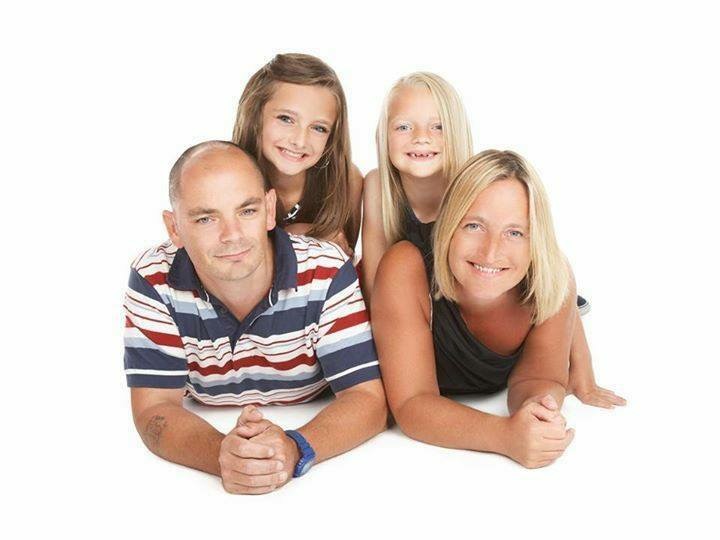 When Ryan Wynn took his own life two years ago, his devastated family had no idea where to turn for support.

Ryan, an ex-army reservist from Tamworth, committed suicide after struggling with mental health issues following a tour in Afghanistan. His wife Chantelle and 14-year-old daughter Rosie found Ryan’s body at the family home. They, along with younger sister Daisy who was 10, were left traumatised by the loss.

“It was the most horrendous time and I literally didn’t know which way to turn,” said Chantelle. “I knew I needed to get help for the girls. I was told it was grief and to leave it six months, but they needed help for the trauma as well as the grief.”

The family were referred to St Giles’ Phoenix service that supports families and children, by Daisy’s school. They began with one-to-one counselling for Rosie, but soon started bereavement support together.

Chantelle said; “We’d lost the connection between us when Ryan died. Rosie didn’t want to be in the house and we didn’t know how to be together without him. The Phoenix team stepped in when we needed it most and when no-one else would help.”

There was a sense of trepidation at the start of the process for Rosie and Daisy, as neither of the girls knew what to expect.

“I was really worried and I wasn’t sure if I wanted to do it, but it really helped,” said Rosie. “Every session, the first thing I would do was cuddle the massive bear that sits in the family room and we gave it a different name every week.”

“We did loads of activities to help us remember Dad and talk about him. It really helped because we would talk about things and deal with the emotions as they were coming up. It’s better to get stuff off your chest than keep it in, although we didn’t have to talk if we didn’t want to.”

The family’s sessions at Phoenix included talking about both the emotional and practical elements of family life and learning to live without Ryan.

“The sessions really helped us start to work as a team and think about how we could support each other, even down to debating who would walk the dog,” said Chantelle. “We also had to shift roles in the family because I was always strict Mum and Ryan was the laid back, fun one. Talking it through, I realised I needed to change that and so I’ve become much more mellow.”

One of the most powerful elements of the family’s journey came after they shared in one of the sessions that they felt they had lost the ability to hug and touch each other.

“I think we were all hurting so much that we just went into ourselves – we really had lost that connection and it was hurting all of us more,” said Chantelle.

“Then we were told that complementary therapists at the hospice were going to teach us how to massage each other. We were a bit taken aback!”

“Although we weren’t sure at first, the therapists showed us how to reconnect with each other through head massages and things like that. We literally rediscovered our ability to hug through Phoenix. Now we have a nightly gathering on my bed when we cuddle and catch up.”

The family worked with the Phoenix team for 18 months and finished their sessions early in 2017.

“We’re much stronger as a family now because we know that life is just too short so we focus on making memories,” said Chantelle.

“And we are moving forward – I know there’s still the chance we could go back but I know that the Phoenix team are on the end of the phone if we need them and we’re moving in the right direction.”

To read more about Phoenix and the services we offer, please visit www.stgileshospice.com/phoenix