The Faces of St Giles Raffle share their story 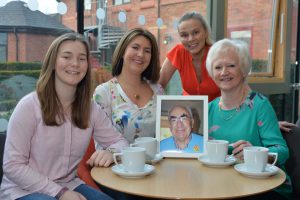 The Faces of St Giles Raffle share their story

A Whittington family who are the faces of the St Giles Summer Raffle are urging local people to dig deep and buy tickets to help to provide care for more people like David Ellis. David’s story is featured in the summer raffle pack and daughter Catherine Gibson said he would have been pleased to support the St Giles raffle, which aims to raise £50,000 for the hospice. “My mum Barbara and Dad were supporters of St Giles Hospice from the very beginning, when the original Friends of St Giles fundraising group was first established in 1981,” she said. “Over the last 30 years they helped to raise tens of thousands of pounds for St Giles through amateur dramatics, Masonic events and various other fundraisers.” It was when David was diagnosed with cancer that the family sought the support of St Giles.

“Dad was diagnosed with bowel cancer in 2012 and after undergoing an operation and six months of chemotherapy, he received the all clear for three years,” said Catherine. “Sadly, the cancer later returned and at the start of January 2016 we were told his condition wasn’t curable and we were put in touch with the team at St Giles. “Dad’s doctor had arranged for a hospital bed and various aids to be delivered to Mum and Dad’s house, as well as the support of an overnight nurse, so he could be cared for at home. “As Dad’s condition deteriorated we thought it was the beginning of the end, and we were lucky enough to secure a two week stay for him at the hospice in Whittington.

“Within hours of Dad being admitted, the doctors had established that the main reason for his steep decline was the steroids reacting with his diabetes medication. “In the next two days he went from almost being in a diabetic coma to sitting up, talking and being able to feed himself again. He left the hospice two weeks later in a much improved state of health – still terminally ill, but at least he was able to return home.
“After he left the hospice we were lucky enough to have a care package in place with the fantastic Hospice at Home team, where carers came to the house four times a day to help provide his daily care needs – and we cannot praise them enough. 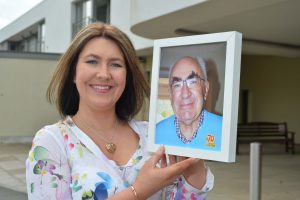 “By the end of September 2016 Mum needed more help taking care of Dad, who was readmitted to St Giles for two weeks – and they turned out to be the last two weeks of his life. “Dad’s final hours could have been so traumatic for us, but the care we received made us feel like everything was natural. “At the end, while it might sound strange, everything was right. Dad had his wife and daughters with him, he had seen his sons in law and three grandchildren earlier in the day and two of his favourite nurses were on duty – his ‘Whittington Girls’ as he called them – both of whom he had known for almost 40 years. “If it hadn’t been for the care we received from St Giles Hospice, we would have had a much more traumatic and difficult 12 months and Dad would certainly have suffered more than he needed to. Thanks to their skills, resources and professionalism, Dad lived to attend his grandchildren’s Duke of Edinburgh Award ceremonies and celebrate his Golden Wedding Anniversary at home with his family and friends.

“We will always miss him, but thanks to the amazing people at St Giles Hospice, we can honestly look back on the last 10 months of his life with fond and many more happy memories than we would have thought possible. “St Giles receives a third of its funding from the NHS and relies on the support of the local community to provide care. “Playing the St Giles Hospice Summer Raffle is a great way to help St Giles continue to support and care for people like my dad.” To buy a ticket please call 01543 434020 or visit www.stgileshospice.com/raffle. Top prizes are a Kia Picanto or £8,000 in cash.