The grateful family of a Staffordshire cancer patient who spent his last days at St Giles Hospice are urging people to take a leaf out of their book by supporting the hospice’s Memory Tree tribute.

The name of Stephen Barton, aged 53, from Winshill, Burton on Trent, is one of more than a hundred inscribed on brass leaves on the sculpture, which takes pride of place in the reception area at the Whittington hospice.

Stephen, a car boot sale organiser, was diagnosed with tongue and mouth cancer in September 2016 and passed away at St Giles in January 2017. His family were so thankful for the care he received that they have spent the last year raising more than £5,400 to support the work of the hospice. 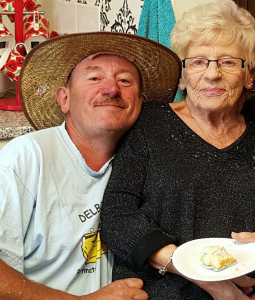 Stephen’s sister Jackie Barton, 49, of Winshill, said: “I think the Memory Tree is a fabulous idea and it looks very impressive when you visit the reception area at St Giles.

“When you see your loved one’s name on the tree it fills you with so much pride about the family member you lost, as you remember how brave they were, and in some way you are comforted that their name lives on.”

Stephen first realised he was ill when he noticed a pea-sized lump in his neck and went to visit his doctor. He was referred to hospital in Burton and then Derby, but despite chemotherapy and then radiotherapy his tumour continued to grow.

His district nurse suggested that the family contact St Giles Hospice and they were able to offer Stephen immediate support by sorting out his pain medication and helping him to arrange his benefit payments.

When Stephen’s illness became so severe that he could no longer live at home he was admitted to the hospice on the same day.

Jackie said: “Stephen being at St Giles was a blessing for the family because it meant that we could visit him any time – day or night – and the environment he was in was so much nicer than a hospital bed in a ward.

“Unless you experience the care at St Giles you cannot really appreciate how much everyone does to make things as easy as possible for patients and their families. Nothing was ever too much trouble. There were people who had their pet dogs with them in their rooms and St Giles will do anything in their power to make those last days as comfortable and as special as they can be.

“It is not a frightening place – you say the word ‘hospice’ to a lot of people and it conjures up all sorts of fears but we were able to take babies and toddlers and it was a happy place for them to visit.”

Jackie stressed that Stephen passed away in a dignified manner. “Staff constantly checked that he was not in any discomfort and provided us with camp beds,” she added. “The family held a little party – we had a bottle of wine and some beers with him and we laughed and cried and told funny stories about him. Stephen was well aware that we were with him to the end.”

After Stephen died, his partner Carol Ward’s daughter in law Sarah Wade and his sister Jackie organised a family fun day at Woodville Box Club in Swadlincote, to raise funds as a way to thank the hospice.

Jackie’s childhood best friend Trudy Clements, who had lost contact with the family for many years until they got back in touch two years ago, kept in regular contact to check on Stephen’s progress and offered to do a sponsored head shave at the fun day as a further fund-raiser.

When they were told about the Memory Tree initiative, Stephen’s family were delighted to have the chance to honour his memory at the place where he had spent his final days.

Jackie added: “I would encourage other families to sign up for a Memory Tree leaf because it’s a great way to remember your loved one and it really helps the families of other patients by giving them a sense of how many people St Giles actually supports and how much their care is appreciated.” 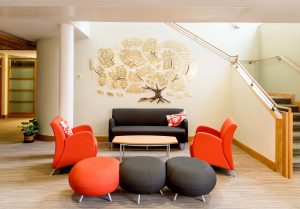 The Memory Tree is made up of 450 leaves which features the names of loved ones who have passed away, whether they have received care at St Giles or not. For a suggested minimum donation of £120 the leaf is displayed on the tree for a year. Families can then either renew their leaf or receive it in a special keepsake box.

The tree was unveiled at the end of May 2017 and already more than a hundred inscribed leaves have been added in memory of loved ones. Names are engraved on the leaves free of cost to St Giles by Tamworth-based trophystore.co.uk.

Abigail Mills, In Memoriam and Legacy Manager at St Giles Hospice, said: “The Memory Tree is a nice way to remember someone and it is particularly treasured by the families who have spent so much time here with their loved ones at a very emotional period in all their lives.

“Many people find it a real comfort to maintain this link with St Giles when their relative has passed on, knowing that their support will help to ensure that the work of the hospice can continue.”