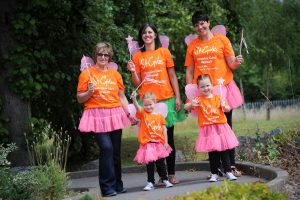 FAMILY and friends of a Willenhall man who died of lung cancer are set to take part in a night-time walk to raise funds for St Giles Hospice.

The team of fifteen will join the Starlight Walk in Aldridge on September 9, in memory of much-loved husband and father Alf Knowles, who died in November, aged 69.

After raising an incredible £14,750 in his honour, Alf’s family are appealing for more people to sign up for the walk, choosing a route of either 3.75 or 7.5 miles.

Alf’s daughter Ellen Knowles, 34, said: “It’s going to be a fantastic fun night and we can’t think of a better cause to raise funds for.”

Alf, a former foundry worker, drop forge stamper of 50 years and Aston Villa fan, was four years into his retirement when he became ill last summer.

“We were on holiday together in Wales in August when we noticed his health deteriorate,” said Ellen, mum to twin daughters Ava and Eve, aged four.

“He mentioned this pain in his shoulder and he put it down to the fact that he’d had a demanding job since he was 15. Then we noticed he was getting lethargic and he was in excruciating pain.”

After several trips to the doctors, tests showed Alf had a large tumour in one of his lungs. Further investigations showed the tumour had spread, which meant he only had weeks left to live.

“It was late September and I’ll never forget dad’s reaction as we were given the latest results of his chest scans,” said Ellen. “He said, ‘I’ve had 69 years, that’s good innings, some kids don’t get 6 years. If it’s my time, it’s my time’. He’d just been given a death sentence and there he was being selfless, trying not to upset us. That was typical of dad – he was one in a million.

“He wasn’t just our dad, he was our best friend as well. He was a grafter in every sense of the word and he would do anything for us.”

Alf spent much of the next four weeks in hospital before the decision was made to transfer him to St Giles Hospice in Goscote, Walsall.

“St Giles was a revelation to us,” added Ellen. “It was so like home it felt like Dad had become a person again, not just a number on a hospital ward.

“Dad loved his dog Murphy, so the fact that he was allowed to come and stay with him as well was wonderful. We had fish and chips together and chilled out watching TV. And when the local football derby was on his close mates got it streamed on a laptop and he was able to watch it. He even enjoyed a pint of Guinness. He was in his element.

“They made sure mum’s needs were met also, offering complementary therapies for them both and bringing in an extra bed so she could stay with him.

“They couldn’t have been more thoughtful and for that we’re eternally grateful.”

Alf, dad to Ellen and Laura and husband to Judith, died on November 1 and it wasn’t long before the close-knit family decided to fundraise in his memory.

“At Dad’s wake, we raised £1,703.00 for St Giles Hospice Walsall,” said Ellen. “That’s when someone suggested doing TrekFest, which is a 25km walk over the Brecon Beacons. We didn’t realise before we got there that it was an SAS route! It was a slog but we made it and raised over £9,000.”

The family also held a charity evening titled ‘A Night To Remember Alf Knowles’ on what would have been his 70th birthday in July, raising over £5,000.

“Dad’s legacy will live on in the money that we’ve raised,” said Ellen. “And if his story can encourage others to support St Giles then even more people will get to benefit from the same dedicated care he received, from this amazing place.”

St Giles Hospice supports more than 7,000 people each year facing the challenge of a potentially terminal illness. The hospice funds 400 staff and 1,450 volunteers dedicated to improving people’s ability to live a fulfilling life for as long as possible.

St Giles Hospice chief executive Emma Hodges, said: “We’re delighted that Alf’s family will be joining us on what will be our sixth Starlight Walk and we’d like to thank them from the bottom of our hearts for their continued support.”

To find out more or sign up for the walk visit: www.stgileshospice.com/starlightwalk