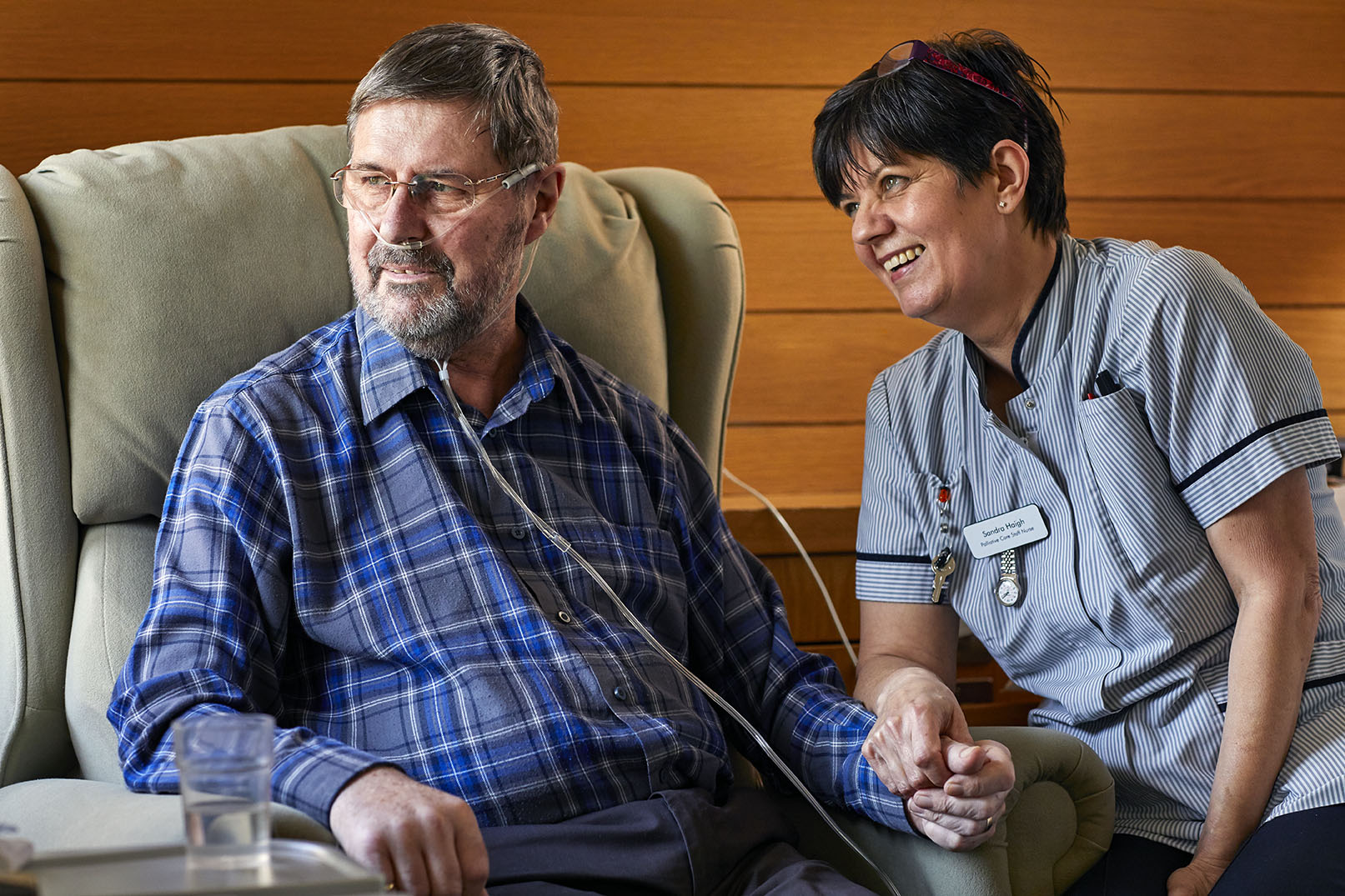 The family of a local vicar who became the face of a Whittington Hospice charity’s new strategy just days before he died, have marked the anniversary of his death with a £14,000 donation.

Reverend Richard Bailey, who was the vicar of St John’s Church in Shenstone and St Peter’s Church in Stonnall, died at St Giles Hospice last year.

His picture with nurse Sandra Haigh was used on the front page of the charity’s five year strategy, which was launched just a few days before he died.

His wife Marilyn, son Stephen and daughter in law Nicole, with Neil Baines from Thompsons Solicitors and a representative from the Derbyshire

Asbestos Support Team, visited St Giles to hand over a cheque for £14,000. The family received this from an asbestos insurance claim, which caused Richard’s mesothelioma.

Marilyn said Richard had visited the hospice many times to support parishioners and had felt safe and secure when he was cared for there.

“Richard initially went to the hospice for several weeks to help manage his pain and control his symptoms,” she said.

“But after he returned home it quickly became clear just how much pain he was in and how determined he was not to be what he felt was a burden to his family.

“The team at St Giles offered amazing support and helped us to get him back into the hospice at quickly as possible.

“It was obvious as soon as he sat in the chair just how relieved he was to be there and how safe he felt.”

“All of us, including our daughters Caroline and Jeanette, knew that he couldn’t have been in a better place for his last days.”

At Richard’s funeral hundreds of copies of the strategy document were handed out and Marilyn said he would have been delighted to do anything to support the hospice.

“It’s been wonderful to see his picture not just on the report, but on mini buses and the mobile clinic, and even in the shops,” she said.

“He really valued the support he received as did all our family, so we really wanted to do something for the hospice.”

The family worked with DAST and Thompsons Solicitors to progress the claim against a former employer of Richard’s, when he was a carpenter in the building trade.

“We’d like to thank Thompsons and DAST for all their support in taking this forward and helping us help St Giles,” said Marilyn.

“We based the amount of the claim on what we roughly calculated it would have cost to care for Richard at the hospice and I know he would have been pleased we were able to give that back.”

In Memoriam and Legacy fundraiser Abi Mills said it had been a pleasure to welcome Richard’s family back to the hospice.

“It was a lovely and very emotional visit to be part of and it was wonderful to show them where Richard’s picture had been used,” she said.

“We are incredibly grateful for the donation and will use it to care for more people like Richard and his family.”