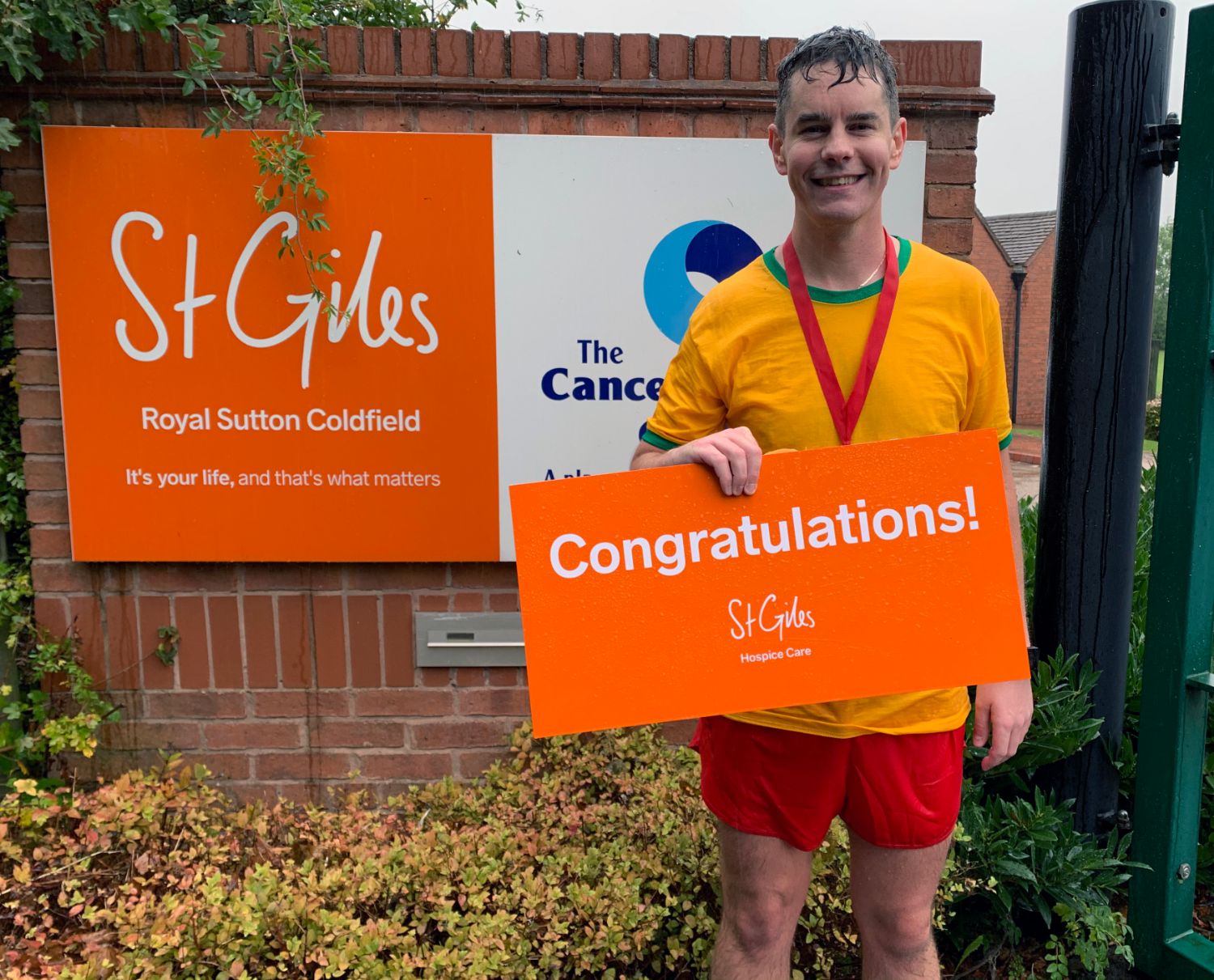 A Birmingham fundraiser is hanging up his running shoes for a well-deserved rest after completing an epic 20 marathons in 2020 for St Giles Hospice.

Even the Coronavirus lockdown couldn’t deter keen Sutton Coldfield runner Mark Shanahan from his quest to clock up 520 marathon miles and raise more than £9,000 for the charity, which supported his Uncle Gez while he was living with cancer.

31-year-old Mark crossed the finish line of his 20th marathon of the year in torrential rain at the St Giles Hospice site, in Lindridge Road, Sutton Coldfield, on Saturday, October 3, cheered on by family and friends.

He said: “It’s a great feeling to reach the finish line after taking on such a huge task!

“What should have been straightforward has turned into a unique challenge this year. It’s been tough at times to get through it all but I’ve had some amazing support along the way. My family, friends and colleagues have been so supportive and generous all year – I’m really grateful.”

Because he had run marathons before, Mark decided that he needed a new focus in 2020 to encourage donors to help him raise a substantial total for St Giles Hospice, which supports people and their families living with a terminal illness.

Mark said: “Running 20 marathons in 2020 had a nice ring to it so I signed up to do 20 events. Everything was going well and I had already run five marathons when suddenly the COVID-19 crisis hit. The remaining events were quickly cancelled and I realised that I would have to go it alone.”

Determined to keep up the momentum and retain his fitness levels, the Jaguar Land Rover marketing manager then ran a solo marathon around Sutton Park – but he hit a new obstacle in March when lockdown was declared.

“We were told we were allowed out for 30 minutes of exercise so there was no way I could then go out and run a marathon,” Mark explained. “I didn’t want to break any rules but I needed to keep running, so my seventh marathon took place in my back garden and my eighth went up and down my drive.”

When lockdown was eased Mark was able to hit the streets once more, and he began a series of solo runs which he hoped would catch the public imagination.

These included several loops around the Sutton Fun Run course on the June weekend when that event should have taken place, circuits around Mark’s beloved Villa Park pitch, and runs around and between the Jaguar Land Rover factories in Castle Bromwich and Solihull.

JLR were so impressed by Mark’s fundraising efforts that they donated £1,000 to his appeal total.

Mark decided to raise money for St Giles in memory of his uncle Gerard ‘Gez’ Brennan, a Marston’s Brewery worker who died from cancer in February 2019. In the two years before his death Gez attended classes and social events at the hospice’s Supportive Care Centre in Sutton Coldfield.

Mark said: “Going to the centre made such a difference to my uncle as he was able to enjoy yoga classes and social activities among people who understood and were in the same situation as him. The friendship and support they gave him was invaluable.

“It was a great comfort to his family to know that they were there for him – and for us – when we needed them. St Giles is really important for the local community and I wanted to help make sure that their support would still be available for other families when they need it.”

Mark’s final marathon began and ended at the St Giles Hospice site in Sutton Coldfield. “The route took me through some of my uncle’s old haunts in Kingstanding, Sutton and Mere Green,” said Mark. “It took me past his favourite sports clubs and pubs and was very personal, bringing back some nice memories of the good times we shared. And then it finished at St Giles, which made a fitting end to the challenge.”

Elinor Eustace, Director of Fundraising at St Giles Hospice, said that Mark’s fundraising efforts on behalf of the hospice throughout 2020 had been truly inspirational.

She said: “We would like to say a huge thank you and congratulations to Mark. Completing 20 marathons at any time would be a fantastic achievement but for him to keep going on his own through lockdown and beyond has been nothing short of amazing.

“We’ve had to close our shops and cancel our organized events this year, which has had a massive impact on our fundraising. The support of people like Mark, who have managed to continue fundraising on their own, has been absolutely invaluable at a time when there is a continuing demand for our service. We’ve never needed our supporters more than we need them today.”

If you would like to support Mark you can make a donation at https://www.justgiving.com/fundraising/mark-shanahan1