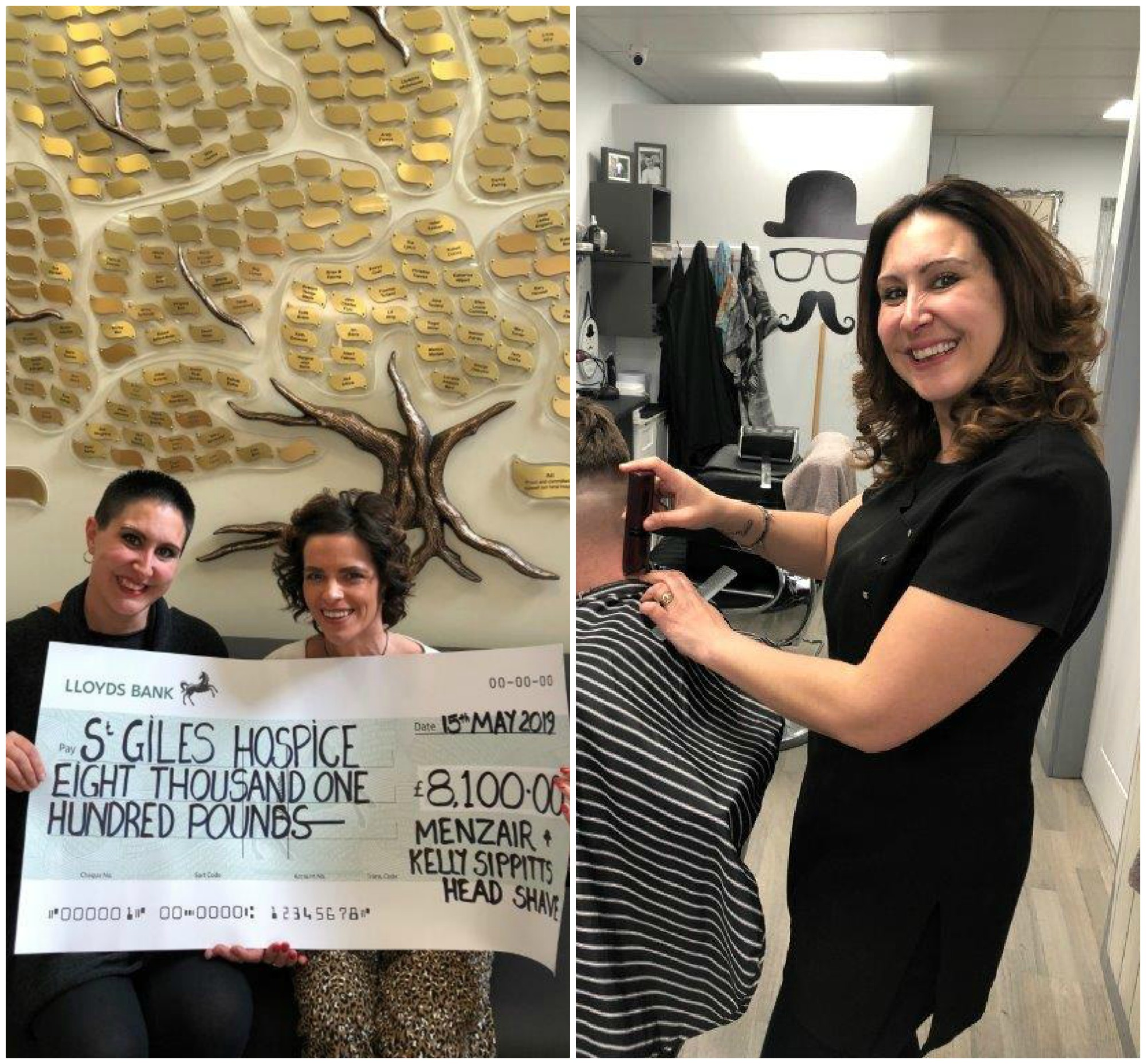 A Tamworth barber shop has raised more than FOUR times its £2,000 fundraising target for St Giles Hospice after the community got behind its charity headshave extravaganza.

Staff and customers at Menzair, in Lower Gungate, embraced the cause when owner Sarah Bond wanted to organize an event to support St Giles to thank the hospice for the care given to her father John Marshall while he was living with pancreatic cancer.

John had helped Sarah refurbish and develop her business when she started it 14 years ago, and he was well known to everyone working there. He was diagnosed with pancreatic cancer in late 2018 and died 11 weeks later. John was cared for at the Whittington in-patient unit and after he was discharged received support from the community nursing team in the final two weeks before he died.

Sarah said: “Dad was able to die at home as he wanted, thanks to St Giles – he said they were all angels. We always knew about the wonderful work St Giles did but when your family is being helped it comes so close to home and you realise how amazing they are.

“We immediately decided we wanted to do more to help, to make sure that other families get the wonderful support we had. We organized the headshave with Menzair’s Kelly Sippitts as volunteer, had a collection at dad’s funeral and a gerbera in the hospice Celebrate Lives Lived memorial garden. We also took part in this year’s Solstice Walk. We want to help in any way we can.”

Since John’s death in December 2018 his wife Ann, who had met and fallen in love with John when they were teenagers, has been supported by the hospice bereavement service and his grandson George has been helped by the St Giles Phoenix service for families.

The headshave event featured a party for passers-by including a cake sale, cones of sweets, a tombola, Bibbledy Bob the children’s clown and live music from Livin’ Tones on the pedestrian area outside the shop and went on into the evening. For a donation, people were even given the opportunity to shave part of Kelly’s head.

Sarah added: “Kelly has always said she’d like to have her head shaved to raise money for the right cause and she said she would love to help us if we could raise at least £2,000. We’re so thankful to her – she was just amazing – and we’d like to thank everyone who donated to Kelly’s Justgiving page, the friends and family who contributed to the collection at dad’s funeral and all the local businesses who donated raffle prizes to make our fundraising day so successful.”

Despite having a fundraising target of £2,000, the event, which was held in April, had raised more than £6,000 by the end of the evening. When the final total was recently added up it came to £8,100.

St Giles Hospice Director of Fundraising Elinor Eustace said: “We’d like to thank Sarah and everyone at Menzair for their fantastic fundraising efforts – and especially to Kelly for agreeing to lose her locks to help St Giles!

“There are so many ways you can help raise money for your local hospice while having a lot of fun at the same time and we’re delighted Sarah and the team were able to turn the headshave into such a popular and enjoyable community event.”