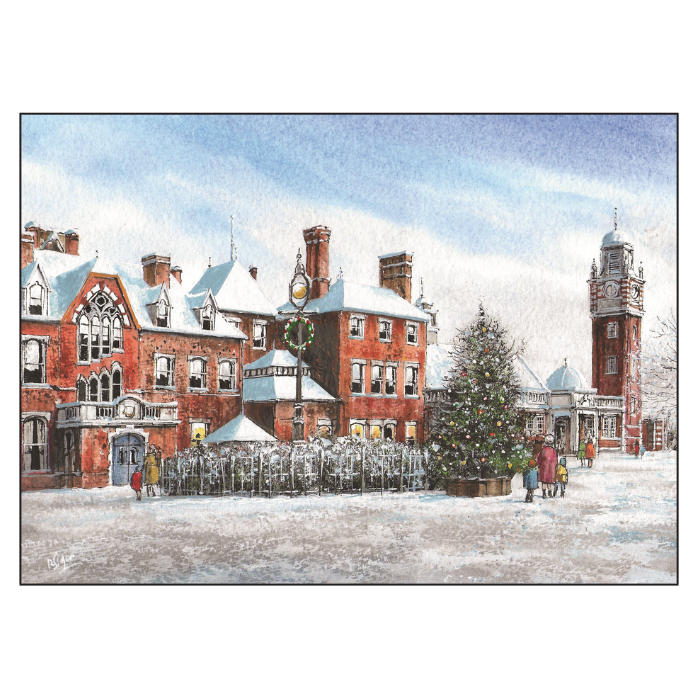 This Christmas, celebrate the beauty and history of your local town or city, with our selection of local scenes Christmas card designs, available to buy in our St Giles Hospice Christmas Card shop. As well as a range of traditional card designs featuring festive scenes and animals, you’ll find bespoke cards featuring paintings of some of Staffordshire and West Midlands’ best known landmarks.

Friends and family will enjoy being transported back to festive times of yester-year, with these charming designs that will really stand out this December.

Every Christmas card sold helps to fund the vital care services that St Giles provides for local people and their families, meaning you will be giving cards mean even more to friends and family this festive season.

To help you choose from our selection of charity Christmas cards featuring local scenes, here’s a little more information on the paintings and landmarks featured.

Lichfield Cathedral is one of Staffordshire’s most treasured landmarks, and in the first of our bespoke cards, has been captured on a snowy Christmas morning by Phil Johnson.

In the painting, the only medieval three-spired Cathedral in the UK is viewed from the snow covered fields surrounding Stowe Pool in Lichfield city centre, as a young boy brings home the family Christmas tree on his faithful sled.

Johnson has featured the Cathedral as the centre piece of the picture, a building synonymous with large gatherings of local people at Christmas time to celebrate. Yet rather than feature any crowds, Johnson chose to place a single young boy in the foreground, in the shadow of the cathedral. The image creatively represents the connection between Christmas, children, family and religious celebration.

Our Sutton Coldfield Christmas card design is a print of a watercolour by East Anglian artist Reg Siger.

Typical of Siger’s work, the painting is created with a drawing in waterproof ink which is then filled with acrylic paints. Unsurprisingly judging by the level of detail in this piece, Siger specialises in painting historical architecture, restoring them and setting them in a scene during the era of their completion.

In this painting, we’re transported back to the early part of the 20th century, the Town Hall officially opened in its current guise in 1906. The war memorial in front of the building which was erected in 1922 is not included, with Siger focussing on a warm, festive scene complete with snow, local families in winter clothing and a large communal Christmas tree.

Our Tamworth Castle Christmas card is also designed by Reg Siger. Although built in the 11th century, Siger hasn’t taken us back to the castles’ origins this time, but he again captures the character and details of this famous local grade 1 listed building.

The scene features the castle’s tower, viewed from in front of the bandstand, which has been decorated with Christmas lights. The bandstand is the only nod to modern ‘family fun’ which can be enjoyed in the castle grounds in more recent times.

The acrylic watercolour scene is completed with a thick layer of snow across the streets and surrounding trees while three youngsters are seen to be enjoying a walk around the castle in the foreground.

Christmas alongside the canal! Phil Johnson’s highly detailed painting features the view from Fradley’s canal footbridge overlooking the lock. Paying tribute to the popular walking location, the piece features dog walkers, families and as is commonplace at Fradley – canal boats.

The surrounding buildings including The Swan pub are decorated for Christmas, with a large Christmas tree and robin included in the foreground to give the very cold scene a warmer, festive feel.

Local people will marvel at the accuracy of Johnson’s painting, especially if they are spending Christmas on their barge!

Give a card that shows you care this Christmas and choose your favourites from the St Giles Hospice Christmas card shop. We’ve never needed you more than we need you today, and every card sold will help fund our vital care services. Thank you so much.